Washington state can electrify nearly all publicly owned vehicles by 2035 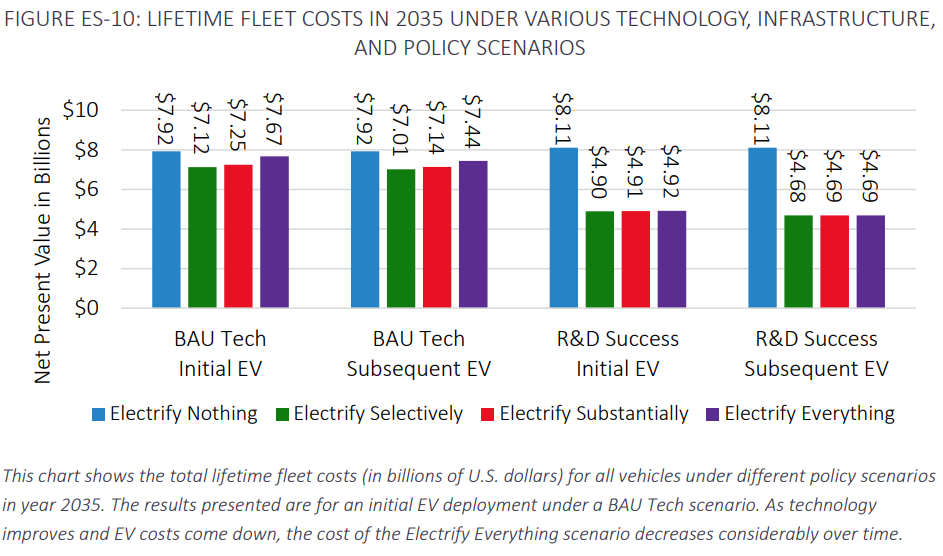 As the electric vehicle (EV) market in Washington continues to recover from the pandemic, state legislators are moving forward with efforts to electrify public fleet vehicles across the state. The study found Washington state is positioned to cost-effectively electrify nearly all of its publicly owned vehicles by the year 2035.

“Our analysis helps to validate the slew of public fleet electrification targets we are seeing across the United States,” says Charles Satterfield, Senior Manager at Atlas Public Policy and lead on the study.

The study team evaluated the electrification potential on a vehicle-by-vehicle basis for nearly 29,000 publicly owned vehicles. This included all manner of light-, medium-, and heavy-duty vehicles being operated by state agencies, school districts, and transit agencies across Washington. The outcome of the analysis was favorable for EVs, revealing several cost-effective pathways to widespread electrification over the next 15 years.

EVs currently only represent approximately three percent of all public vehicles in Washington, below existing targets such as those set forth in Governor Inslee’s EV Fleets Initiative in 2018. With near-term policy action and targeted investments in infrastructure, the state can accelerate ongoing efforts to advance EVs and solidify its leadership position in the EV market in the United States. The results of the analysis show that more than 1,650 vehicles in the fleet could be electrified cost-effectively today, resulting in a savings of more than $72 million over the lifetime of the vehicles.

The study recommends that the state develop a roadmap to swiftly increase the share of EVs in the public fleet between 2020 and 2035 as doing so could result in billions in potential savings. Even under the worst case estimate of technological advancement included in the analysis, more than half of all public fleet vehicles in Washington have cost competitive EV alternatives by 2035. In this unfavorable scenario, a complete conversion of the fleet to EVs would still result in savings of more than $250 million. Savings potential associated with 100 percent electrification explodes to more than $3.4 billion when assuming reductions in the cost of charging infrastructure and cost-saving innovations for EV batteries. This assumes the vehicles would be purchased all at once in 2035, which is of course, not how fleet procurements work, but illustrates the immense savings potential of substantial electrification. The state can leverage a roadmap to distribute procurements in a way that maximizes savings potential over the next 15 years.

The last ten years have shown us how an 87 percent decline in the cost of batteries has facilitated a more than 18-fold increase in annual U.S. passenger EV sales between 2011 and 2019. Increasing model availability and technological innovations will only improve the prospects of fleet electrification for states like Washington.

With significant public funding remaining through programs like the Volkswagen Settlement and policy leadership through the adoption of the ZEV Truck and Bus MOU in July 2020, the state is well positioned to cement its leadership position in the EV market in the United States. Public fleet managers can lead by example and create early demand for new vehicle offerings and technologies in the state.

Atlas Public Policy equips businesses and policymakers to make strategic, informed decisions that serve the public interest. Atlas builds analytical tools and dashboards using powerful, accessible technology, and offers expert advisory services to tackle the pressing issues of the day. Atlas is based in Washington, DC and started in 2015.

Visit our newsroom for more press releases and Atlas in the news.